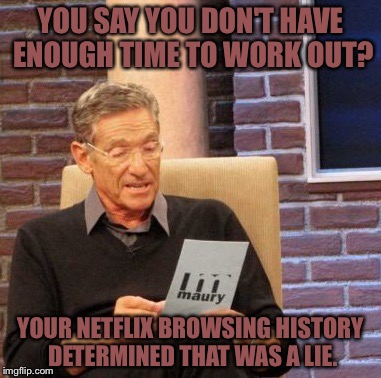 Ask any coach in the world whats the biggest excuse you get for people not training. i promise you it will be “i don’t have enough time to train”

Its probably up their with the biggest and most fake excuses we’ve heard.

So what i going to do is squash this excuse. So unless you are living two lives, work multiple jobs, work away a hell of alot, or are a single parent with multiple children we don’t believe you.

We have 168 hours in the week. lets say you sleep 8 hours a night which makes up 56 hours a week, we still have 112 hours left.
Now lets say you work a 60 hour working week along with 2 hours commute over a day 5 days adding up to 10 hours which makes it 70 hours, leaving us with 42 hours left.

Now with our 42 remaining hours lets filter in your personal life. Lets allocate 3 hours a day for socialising, family time, eating with family and all the trimmings which makes up 21 hours leaving us with 21 hours left.
With the 21 hour remaining hours lets add in your own personal time where you do all your stuff, washing, cleaning, watching tv and messing around and lets say thats 2 hours a day so that would make 14 hours a week.

So after that we have 7 remaining hours in the week.

Now the optimal visits to the gym that we suggest are 3 visit which last about 50 minutes to a hour each, that still leaves you with a extra 4 hours left if you do in fact hit the gym, those 4 hours can filter in anywhere sleep/play or watching tv.

Now I’m a shoddy mathematician, like supremely shoddy but i think got the numbers right there.

The fact is more often than not, you’ll make an excuse because your just not in the right frame of mind to exercise, it might not be a priority for you or you may not see the value in it.

But from me to you and most people hearing your excuse we tend to see right through you.

You only get the one body, why not make it look as sexy as possible!

This website uses cookies to improve your experience while you navigate through the website. Out of these, the cookies that are categorized as necessary are stored on your browser as they are essential for the working of basic functionalities of the website. We also use third-party cookies that help us analyze and understand how you use this website. These cookies will be stored in your browser only with your consent. You also have the option to opt-out of these cookies. But opting out of some of these cookies may affect your browsing experience.
Necessary Always Enabled
Necessary cookies are absolutely essential for the website to function properly. This category only includes cookies that ensures basic functionalities and security features of the website. These cookies do not store any personal information.
Non-necessary
Any cookies that may not be particularly necessary for the website to function and is used specifically to collect user personal data via analytics, ads, other embedded contents are termed as non-necessary cookies. It is mandatory to procure user consent prior to running these cookies on your website.
SAVE & ACCEPT